I gathered for my usual Thursday night Privateer Press gaming with friends at Drawbridge Games, and managed to face off against a faction that I’m very familiar with: Legion of Everblight. Rico kept his Rhulic Mercenaries on the shelf and instead pulled out his amazingly-painted Legion forces. They’ve got a great bone paint scheme which really makes them pop more than a lot of Everblight schemes. We faced off in a 35-point match with a three-objectives scenario. His Warlock was Thagrosh, while I fielded Void Seer Mordikaar at the helm of my Skorne army.

Thagrosh’s force was a Scythean and a Carnivean for the heavy lifting, along with a Naga Nightlurker, a Shredder, and a unit of Legionaires. He was also accompanied by a Beast Mistress that was running three Shredders of her own. My own list was not a particularly great one for Mordikaar, but just one that worked for the points value while I’m working on painting all the parts of my new Skorne experiment. I brought a Bronzeback and a Gladiator, and a Basilisk Krea, a unit of Cataphract Cetrati, and the usual complement of supporting Skorne solos and units. 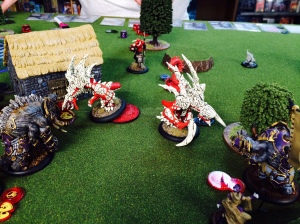 The forces largely clashed over the center and left objective. On the left flank, the Beast Mistress and her horde of Shredders turned their attention to the Cetrati. They made a fair mess of them, as the sheer amount of dice that the Beast Mistress gives them is bound to make an impact even from a low strength model like a Shredder against the high armored Skorne heavy infantry. Then once one gap appeared in the shield wall, the surrounding isolated models got further assailed by the gnashing teeth of the annoying beasts. In the center, I was luckier in that the Scythean fell just short of the Gladiator in its charge, while the Carnivean tried to control the objective that lay in the center. Most importantly to my eye was that Thagrosh decided to use all of his Fury that turn. I’m relatively new to Void Seer Mordikaar (only my second game with him, and I’m relatively new to Skorne as a faction overall), and he has an ability that I’ve been wanting to pull off for some time: Essence Blast.

Essence Blast is an attack that sacrifices a model to generate a spray from its location using the model’s Strength. It seems custom-fit to use one-wound infantry models for this, as Mordikaar can replace them and they’re expendable anyways. Despite my Titan Gladiator being entirely undamaged, I saw that the opponent’s caster was open and without fury. Pulling off the maneuver proved to be a case of perfect timing and rolls. It began with the Bronzeback clearing some of the path of advance with a throw, and then the Gladiator doing what he does best: slamming a foe. It had to suffer a free strike from the Scythean to do it, but the damage was inconsequential. The Gladiator slammed the Naga Nightlurker, who flew backward and hit Thagrosh–leaving the warlock knocked down. 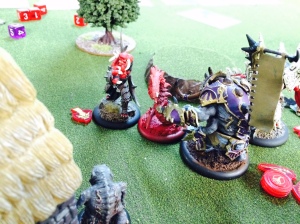 I took a few swipes with the Gladiator at the Naga just in case of retaliation, and also advanced up the Agonizer in case the Titan didn’t get the job done and I needed to Essence Blast from the mewling, tortured baby elephant as well. Turns out I didn’t need it: Mordikaar cast the spell, completely destroying my Gladiator but also delivering a fearsome spray that combined with the bit of collateral damage to slay Thagrosh before he knew what hit him. I was shocked that it actually worked that easily (expecting to need a shot from the Agonizer and maybe even some whip-wielding charging Paingivers to make the gambit finish him), and my opponent was shocked that hit happened so quickly.

While we were busy with exploding elephants, the other table saw a clash between Retribution and Trollbloods–I snapped a picture of their battle too because the Glacier King was just too cool to not discuss.

And discuss him we did… to the point where I talked myself into starting (yet) another faction. I’ve always had my eyes on Trollbloods (even had a Madrak2 model that I bought a long time ago and never built around but never got rid of). I’ve loved the look of the trolls for a long time, and I’ve always found them to be tough foes… well, not too tough (someday I’ll tell the tale of an old battle where my Lich Lord Venethrax decided that taking out a Mountain King himself was the plan). But the discussion of trolls got my own troll-blood flowing, so you can watch for them to begin to appear on this blog as I finish a few.

One thought on “Warmachine/Hordes: Exploding Elephants”