I attended a 50 point Steamroller tournament at Legions Games, and brought my Cryx along for the ride. I really wanted to bring my Skorne, but I’ve been playing so much Cryx lately for the Journeyman League that I was just more comfortable with them at the moment. This event was a two-lists event, so I chose to bring Goreshade3 and Scaverous–the two casters I’ve been running the most lately. Goreshade’s list was designed more for handling infantry, while Scaverous’ list was much more of an assassination vector if my opponent had thin lines and was vulnerable if a corridor is opened (Scavy’s specialty).

First up, painting. I finally added the first Mercenary unit I’ve ever purchased to my force, an Orgun Bokur. The main reason was to give a bit of defense to my caster, as the Bokur can use Shield Guard to take incoming shots for them. It helps prevent nonsense that would cause my caster to lose focus or be unable to cast/gain focus in the next round.

This brings me to 37 points painted this far in 2016. I’m a 10th of the way to having painted a point per day! I did him in the colors I’m doing the rest of my Cryx in, as he’s likely to only ever hit the table alongside my Cryx force. 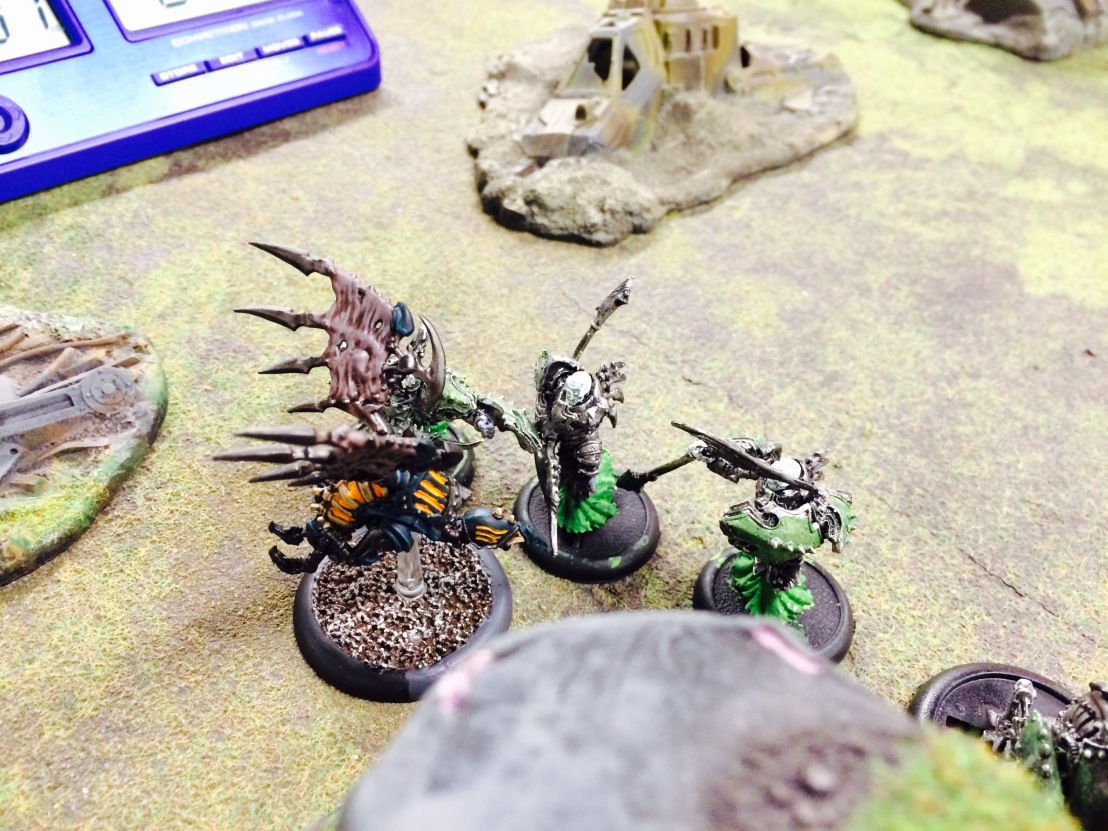 First up was a pretty balanced Skarre list run by Ian. My Shrike actually did a pretty impressive job in this game. I got jammed by a group of Satyxis Raiders early, so to make sure I could contest I had to use Goreshade3’s feat on the top of turn two. The good news was, that meant the Shrike auto-hit on a long line of tramples and he soared a whopping 13 inches (thanks to Infernal Machine) and obliterated one half of the jammers in a literal fell swoop. The rest of the game he spent dodging attacks from the Bane Knights thanks to his high defense, until one finally tagged him and destroyed the little birdjack.

Skarre’s alpha strike really hurt, especially the Soulhunters simply annihilating my Revenant Crew. However Goreshade3 was able to rush back and apply some scenario pressure, dominating the zone and getting some points for me while my opponent never quite cleared their zone. It meant that Skarre needed to go for the assassination, but it didn’t quite take. Goreshade was left in range of Skarre with a Helldiver behind her: the little jack surfaced, headbutted her to the ground, and Goreshade3 finished her with a charge.

Round Two I faced Cryx again. This time I was facing Ryan, who dropped his Goreshade3 versus mine. Our lists were pretty different except for Mechanithrals and Bile Thralls, and Ryan got the first turn–which proved to be pretty decisive. He played his Bile Thralls up, charged and destroyed some with Goreshade3, then used Mockery of Life to get them placed even further up the field. A variation I should have done to him if I had gone first–but instead I had to play a bit defensively and creep around the sides.

My Goreshade3 played up to the objective between two forests, recognizing that if I was going to do anything I’d need to increase the scenario pressure a bit.

The problem was that I had to keep flooding the middle to keep him from scoring, and the Kraken and Bane Riders kept him well ahead of the curve. I kept the pressure up as much as I could, but once he got my objective dead and dominated the center for a round, it was all over but the taxes for most part. I crowded the zone once more, but his Kraken did its thing and I was too little too late. Still a fun game, as Ryan is always a great opponent who I learn a lot from when I play (he went on to win first place in the event).

My third round match was against Justin’s gorgeously painted Khador force. Just look at that Behemoth. He fielded Vlad, which meant that my forces would have to sell themselves dearly–whenever he attacked me he was sure to hit and damage because of the added dice. I started my pressure early with the Mechanithralls and Revenant Crew, and while they did indeed die in droves they at least took some stuff with them–in particular heavily damaging the Behemoth.

I ended up winning thanks to the death clock–Justin timed out for the round. It was a lucky thing too, as I was definitely losing the attrition game. My jacks were intact, and I was deciding whether I could try to scenario or simply had to nudge an arc node up and hope for a Hail Mary assassination through spells. Thank goodness for the Revenant crew in this game–I think a lot of time was spent dealing with them. Though I never got any back from their unit’s ability (only through Captain Rengrave adding models), the question they ask of “can you kill enough and then get the job done on the unit leader?” is a time sink for the opponent. Overall a great game, as Justin was a really fun player to face and his army was wonderfully painted.

For the tourney, I ended up 6th overall out of the 14, with a 2-1 record, 3 total control points, and 87 army points destroyed. I ended up playing Goreshade3 in all three games, each time for different reasons. Ultimately, that was fine by me as I was proud of my performance. Pretty good for only having started Cryx in December!