Ah, faction-jumping… My favorite pastime. I’d have a completely painted full faction together by now if I wasn’t so torn all the time. Mark III, of course, threw that into over-drive. I was initially was focusing on Protectorate for Mark III. I wanted to take them to GenCon, but the time grew too short. So I swapped to Skorne as I have much more painted for them. Then (of course) couldn’t make it to GenCon, which meant that I’m still suspended between the two: not quite enough Protectorate to be happy with what’s hitting the table, but a Skorne force that I’m not as entirely enthused about as I’ve been in the past. I swapped to Skorne for our Journeyman league, and while I was intending to play Protectorate in a recent Champions format tournament in my area, I ended up taking my Skorne there as well. Again, the curse of wanting to play fully painted.

That said, my painting addition for the Journeyman league this week was at least something that I could use in my Protectorate force as well (actually, designed and painted to accompany them more than the Skorne). Enter, Rorsh and Brine: 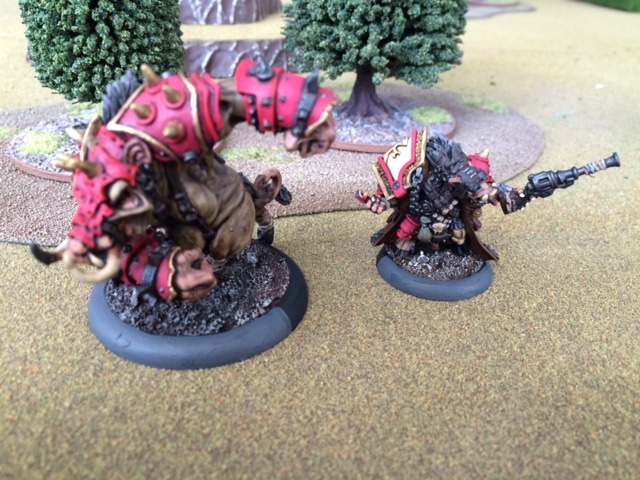 I did Rorsh up as a convert to the faith of Menoth, to the point where he incorporated a stolen shoulderpad from some fallen Exemplar into his armor. Sorry the pic is a little blurry on Brine’s face–he’s a long model and really leans forward.

This past week and two weekends were a flurry of Warmachine and Hordes, with my Skorne getting a lot of action. I played a couple for-fun games, two Journeyman league games, and attended a small Champions tournament at Legions Games.

Kicked it off with a battle between Archdomina Makeda and Ryan’s Broadsides Bart Mercenaries list. I wanted to try out the trick of using lots of Scarabs as shield guard targets for Makeda’s Subjugation of Will spell. This was a good list to try it against, as it was somewhat shooty at first. The melee threat after was hard to handle, and my force dwindled. We were playing with a clock, and Ryan timed out ultimately for a win for me–but he definitely was hammering me (Makeda and a single scarab were hiding at one of the flags) and if it had been a more focused tournament situation he would have most likely won in time.

Again, I faced off again (a different) Ryan’s Terminus Cryx list. It doesn’t have many of the things that he would normally include if it weren’t for Journeyman restrictions, and yet it was a very nasty list to battle with Xerxis2.

This time, Terminus beat Xerxis to death rather than Makeda. Outcome was the same. He’s a monster that Xerxis2 simply lacks answers for in the list I’m fielding for Journeyman. 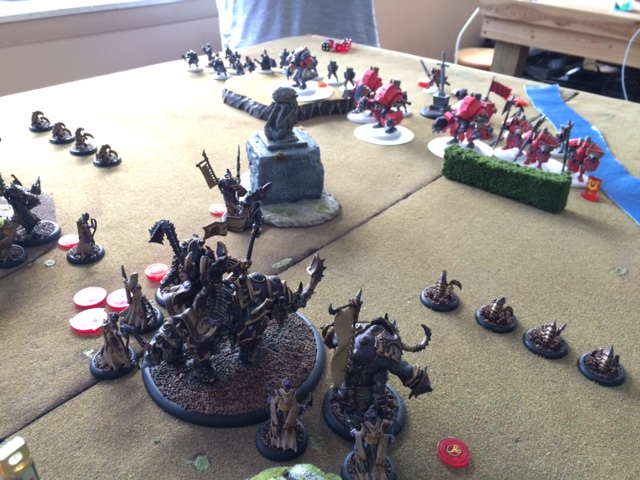 My other Journeyman game for the week was against Paul’s Khador force, led by Vlad. This was a nasty fight, but Xerxis2 did as he always does, ends just a little too close to something. He managed to land a little damage with some ranged attacks as I advanced, and little damage adds up fast on Xerxis2 even with ARM 19 (occasionally 21, thanks to the Razor Wurm). Finally I tried to set up a lane to try and get to Vlad, but just a bit too much could reach him and Xerxis2 was defeated yet again.

I was glad to get in another friendly game, this time against Michael’s Trollbloods force. I took Naaresh for this one, mainly because Michael is a newer player and hasn’t seen every different type of caster. I wanted to show him what an aggressive caster played like–and Naaresh did it well. He led the charge, stomped around damaging foes and surviving attacks leveraged at him. I ended up damaging his caster with Naaresh, and finishing him off with a charging Gladiator to end the game.

As I mentioned above, I also played in a Champions format tournament this past weekend. I fielded a ranged attack Xekaar list and the multiple-shield-guard-scarabs melee list with Makeda. I ended up losing all three games, though two of them were very close. 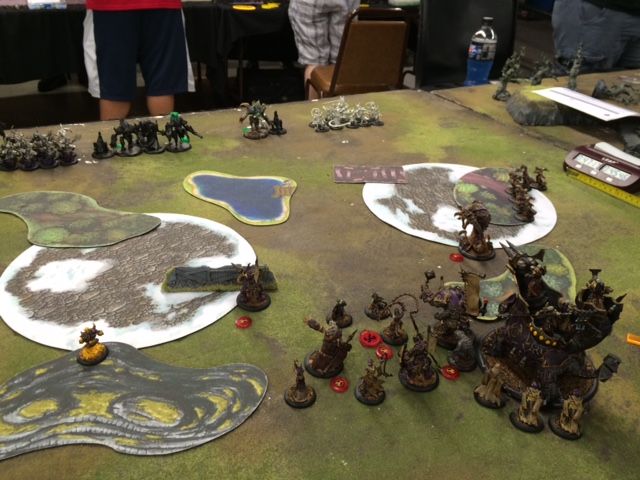 First up, Brandon’s Aspyhxious list. I was doing very well in the match, with my Siege Animantarax and Paingiver Bloodrunners doing great work on my right flank. And that’s why my opponent took a chance at spell assassination. It worked, just barely. Aspyhxious is a good assassin, and Xekaar just didn’t have enough defense around him to survive (note a similar theme next game with Makeda… I need to get a spot for Orrin Midwinter in my lists for my Skorne to be competitive it seems).

Second game was against Kyle’s retribution. I had the distinct feeling he would play Adeptis Rahn, mainly because both of my lists were going to be awful against that match-up. Lo and behold he did, and I got a bit too close with Makeda… After all the twisting, turning, jerking, and pulling she was backwards in front of a few weapon masters and easy pickings. At least it ended quickly. In retrospect, I should have probably taken my Xekaar list and used the Battle Engine simply to deny line of sight as much as possible to my caster, with hopes that my shooting could clear enough of his stuff to try and slog it out at the end. Either way, it was unlikely, and Kyle ran his list very well. 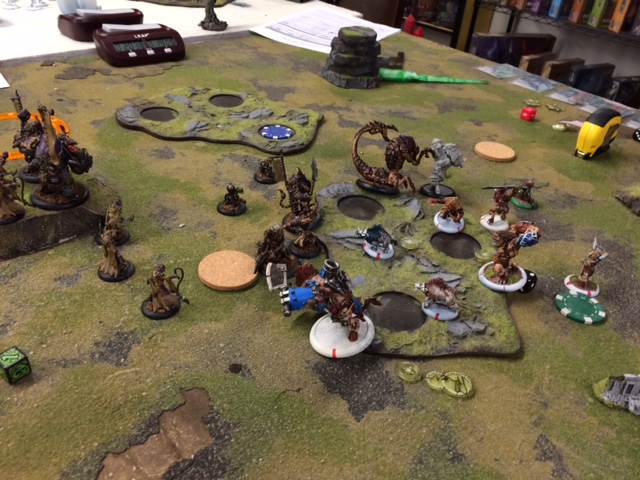 For my third game, I matched up against Andy’s Dr. Arkadius list, complete with four heavy Pigs. I did a good job befuddling him with added fury from the Agonizer and lower thresholds from Xekaar’s feat, but he got to the far flag first and started scoring a bit quicker than I did. I tried to stop him but came up a bit short–the forest in the middle slowing all of my warbeasts besides the Aradus Sentinel, who is just as slow as a Cyclops in terrain anyhow with his Speed 3. A fun and silly game, as Andy is always a pleasant opponent win or lose.

It was a week of a lot of Skorne, which only increased my thinking that maybe it’s time to put a push into my Protectorate and get them at least a single list that’s really Table-ready at 75 points. With the upcoming Crossroads of Courage league from Privateer Press, I’m all the more torn: do I want to try to pull the character’s narrative toward Protectorate, or would it be funny to campaign for him to be a Skorne model instead… Decisions decisions.